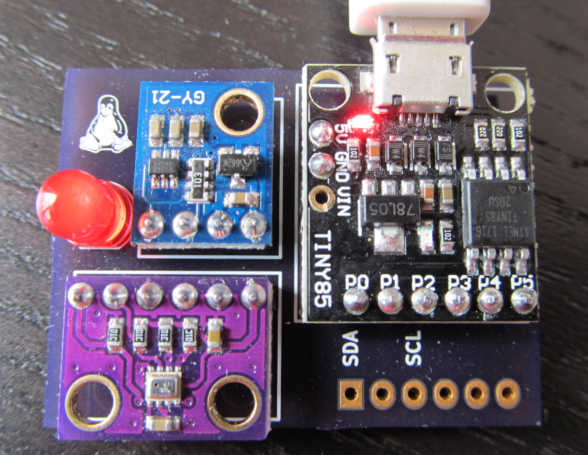 TinyWetter is a small indoor weather station that provides info about temperature, relative humidity and atmospheric pressure by using the bmp280 and si7021 sensors. It uses a Digispark with the I2C-Tiny-USB library to make the sensors available as i2c devices under linux (i.a.) over USB.

The board is designed in KiCad and uses a single sided pcb layout that mostly functions as a cross connect for the daughter boards with the sensors and the Digispark. The LED is used as a cheap "voltage regulator" to provide 3.3V for the sensors from the 5V of the USB connection. Be careful to not use any funtions that require a large current like the heater element of the si7021, because that would likely kill the LED.

The driver is written in rust and can be compiled using cargo build. It uses the i2c-dev kernel interface (modprobe i2c-dev to load the module) to access the i2c devices. Given the device path /dev/ic2-## and the current altitude, it reads the current values from the sensors and outputs the temperature, the relative humidity and the pressure at sea level. Use -v to see more details.